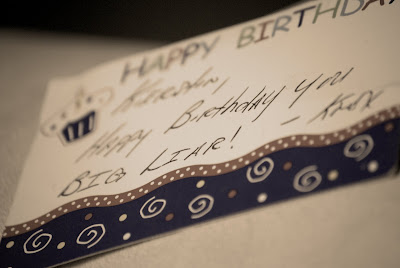 This little card always brings a smile to my face! You see, in college we had something called 'balloon time' in chapel where they gave out balloons to everyone who got one that day. If you wanted to give a balloon to someone, you would go to the bookstore and pick out a balloon (I think it was $1 ea. balloon) & card, write on the card and then in the next chapel service, you would be called up front to get your balloon(s).

Well, one day a couple months into my first semester at TTU, I saw 'Knox' (that is what people at school called Jeff) purchasing a birthday balloon for a friend. I had only met Jeff a few times at this point, but we would joke with each other a lot. I decided that I would tell him it was my birthday, too and see if he would get me a balloon. ;) Well, he did and it was the start of several months of flirting, silliness and drama before we officially became boyfriend and girlfriend.
Oh, and apparently he knew I was lying about the birthday thing...haha! And you will notice that he spelled my name Kierstin. That is what he used to call me. When we met and I told him my name, he said "I'm gonna call you Kierstin." Apparently that was easier to remember than Kristen? But that is what he called me for several months until it was just 'babe.' He still never calls me Kristen.
Posted by blessedbeyondmeasure at 10:19 AM

Email ThisBlogThis!Share to TwitterShare to FacebookShare to Pinterest
Labels: my best friend a.k.a. hubby

I looooooove getting feedback and hearing from my readers! :)